How did the ‘Jewish Gentry’ in Sussex experience the First World War? 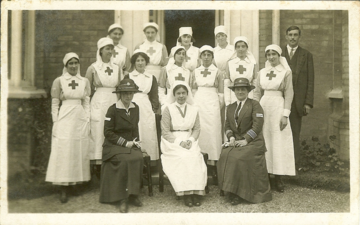 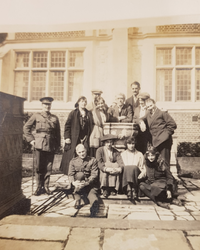 The Shalom Sussex project examined the experience of fifty members of the Jewish community living in Sussex during the First World War. Much of the project focused on Brighton, a metropolitan area where a Jewish community had been established since about 1770. However, we also researched wealthy families living in rural Sussex who could be considered part of a ‘Jewish Gentry’.

Many of these prosperous individuals contributed to the war effort through military service, philanthropy and by providing medical assistance. However, the war exposed tensions in how the Jewish community was perceived. As a result, there were honours and responsibility for some, while for others, war service included restrictions and prejudice.

An example of the latter was the Messel family of Nymans near Horsham. The head of the family, Leonard Messel, was born in Britain and during the war Leonard and his brother, Harold were part of the armed services. However, they were both barred from serving abroad because of their family's German origin. Leonard was however active on the home-front training soldiers for the 4th Reserve Battalion (Kent), and his wife Maud set up a hospital nearby. Nonetheless, anti-German rumours circulated about the family.

Several members of the local Jewish community distinguished themselves in military action. Frederick Stern served in Gallipoli and Palestine and was awarded a military cross. He was much concerned with conditions for his co-religionists in the army and campaigned to have more rabbis at the front. Frederick also served briefly as private secretary to Lloyd George. After the war, he married Sybil Lucas and returned to his home, Highdown, near Worthing. Frederick was a keen gardener and plant collector, a passion he shared with Leonard Messel. Together the Sterns established a chalk garden that is still popular today.

Other members of the rural elite included Lady Eva Mond Isaacs, daughter of the war-time Commissioner of Works, Lord Alfred Mond, who moved to the safety of Sussex for the birth of her second child. Sir Francis Montefiore, a Jewish philanthropist and activist, may have hosted troops in the grounds of his house, Worth Park, Crawley.

Each experience of the First World War is as individual as the person that lived it. However, it is clear that the Jewish gentry of Sussex played their part as fully as their neighbours, even though their experiences were sometimes tinged with discrimination.

All the lives we researched are being added to the websites http://shalomsussex.co.uk/ and https://www.jewsfww.uk/south-east.php. We are grateful to the players of the National Lottery and to the National Heritage Lottery Fund for funding and we would like to thank our project partners, the Centre for German Jewish Studies, Jewish Care and the Jewish Historical Society of England.